Australia’s secluded position means that it was able to develop flora and fauna completely independent from the rest of the world. Here we find animal and plant species that exist no-where else, and it’s worth spending some time to observe these most obscure creatures while you are here.

Australia also has an infamous reputation for hosting some of the worlds deadliest creatures on the planet, and while this is true, venomous snakes and spiders are actually quite shy and hard to find. You might have to go to the zoo to see them! 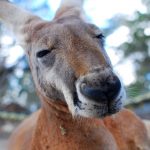 Big, red kangroos are arguably the most well-known representatives of Australia. There are 62 different known species and they can weight between 1-90 kg! While Kangaroos are generally timid and friendly, it should not be forgotten that they have a hige claw on their hind foot that they can use to lash out or ‘box’ at intruders, leaving seriously dangerous wounds.

Therefore it is adviseable not to approach big kangaroos in the wild. Kangaroos are the only large animal that uses hopping to move around, whereby they can reach a hop speed of 65-70 km/hr over short distances. At slower speeds, kangaroos walk aroud quite awkwardly, and they spend long hours during he day resting under trees or grazing. Kangaroo and wallaby encounters in the wild are quite common and if you keep your eyes peeled, you might see them as early as a within a few kilometers of leaving the city. 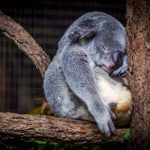 Koalas aren’t actually bears, as many people are led to believe. Even though they look cuddly and don’t move very fast, Koalas have sharp teeth and claws and are best only observed, not approached, if you are lucky enought to see one in the wild. Like Kangaroos, Koalas carry their young ones around in a pouch, where the babies feed on the mother’s milk.

Koalas weigh up to 15 kg and spend most of their life on eucalyptus trees, where they feed on the strong scented leaves. In fact, Koalas are the only species that can survive only eating leaves from the eucalyptus tree, they are quite difficult to digest and even dangerous to other species. It is a myth that Koalas are slow and sleepy because they get high on the eucalyptus oils; in fact they live that way to conserve energy in the heat. One of the greates dangers to Koalas is deforestation, and you might have to go to the Zoo to see one up close.

An Echidna is the Australian answer to the German hedgehog. Common Echidnas have long spikes to protect them from predators and a long nose that they use to poke around in ant holes. Thereby their tongue can snap out 18cm long to catch ants and other insects. Echidnas live in burrows the build with their strong front claws. They lay eggs and raise their young in those burrows. Echidnas are also commonly seen in the cities, so you might even encounter one on a bushwalk!

Wombats look like a peculiar cuddly bear on four sturdy legs. Wombats are not easy to spot, not even in the zoo, as they are active at night and spend the days in their burrows. They are cautious creatures and their numbers are decreasing due to competition from farmers and graziers. You are more likely to see a dead wombat on the side of the road than a live one, so you consider yourself lucky if you spot one. Wombats live with their extended family and dig long tunnels under the surface in which they live and sleep for around 2/3 of their lives. Wombats feed on grass and can reach an age of 25 years. Like kangaroos and koalas, wombats carry their young in pouches.

The Australian platypus is a very special animal in many ways. It is an egg-laying mammal that lives both on land and in the water. The Platypus uses electro-receptors in its rubbery bill to find food on the bottom of freshwater streams, lakes and ponds. Males have a venomous spur on their back legs, and females excrete milk through their skin. Young platypus are born in burrows where they hatch from eggs, but then they drink their mother’s milk. They are a truly fascinating scpecies. If you miss them in the wild, a good place to see a platypus play and swim is the Sydney Aquarium. 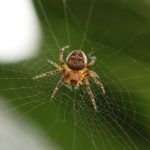 Australia is home to approximately 220,000 species of insects, including some of the deadliest spiders in the world. You will commonly come across the big Amercian cockroach, which is harmless but will happily eat its way through your food scraps if you leave them out over night. A nuisance in the Outback are the thousands of common blowflies that will try to get a drink from your eyes or mouth; it’s a good idea to prepare for an Outback trip with a fly net. You will also see spiders in all sorts of shapes and colours, few of which will be dangerous. For example, seeing a large, brown huntsman spider for the first time can be a bit of a shocker, but they are completely harmless (their bite will only hurt but is not poisonous) and should be left to go after other insects. If in doubt, don’t touch anything, don’t leave food scraps out, and never stick your hand or feet into dark gaps or even shoes before checking they are empty first. Even the most poinonous spider would rather be left alone than fight with you. 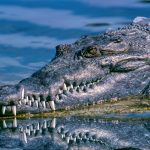 When we think of Australian reptiles and amphibians, the first thing that comes to mind are venomous snakes. The taipan, considered the most venomous snake in the world, is the largest of Australia’s deadly snakes. The King Brown, which roams the Outback, is also extremely poisonous and will not shy away from biting if threatened. Most snake bites happen because snakes are startled. Stay on well-maintained tracks and stamp your feet so that snakes can hear you coming and have to time hide.

Australian reptiles and amphibians also include crocodiles, lizards, frogs and turtles. Encounters with friendly and colourful lizards are not unusual; you might even get lucky and stumble upon the famous blue-tongue lizard in your back yard! You should however steer clear of any waters and beaches that could have crocodiles in them. Australia’s ‘salties’ are hard to spot and inhabit salt water beaches as well as fresh water inlets. You might be surprised to learn that Australia even hosts some poisonous frog species, so it’s a good idea to not touch anything you’re unsure of. 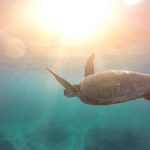 The waters around Australia are a paradise for surfers, snorkellers, scuba divers and marine biologists. They provide a unique and amazing variety of life, featuring the Great Barrier Reef with its 1500 species of fish, 350 different corals, 4000 species of molluscs, and 10,000 species of sponges. If you visit Australia between May and October, you are most likely to see the great Humpback Whales migrating just off the coast. There are dolphins to encounter, sea turtles to see, and thousands of colourful fishes to observe.

Of course Australia lives up to its reputation by offering some of the deadliest creatures under water. It is advisable that you don’t swim at dawn and dusk, and after rain, because sharks are thought to be more active during those times. Also, be advised that there are certain stretches of beach that are unaccessible for swimming during certain times of the year, or even the whole year. This is due to the deadly box jellyfish that comes to shore to breed in large numbers in Queensland, and due to the large saltwater crocodiles further north. Then of course there are smaller stingers, such as the blue ringed octopus and the cone snail, all of which can inflict potentially deadly wounds. However, if you follow the simple swimming rules and stay well clear of any marine life, you will have some of the most fantastic snorkelling, surfing and scuba diving of your life in Australia!